It’s been almost two years since the six-month closure and rehabilitation of Boracay Island.

It’s as if it only happened yesterday, though, as the memory of the abrupt closure remains clear to Rose Brillantes-Gabas, a hotelier who has spent three out of her 20 years of hotel management experience in Boracay.

“There were talks, hearsay, but no one was confirming if the closure would push through,” she tells Manila Bulletin Lifestyle. “When it was finally said that Boracay would be closed, we were all surprised because we still had guests. We were also told by the local government that all hotels must not accept guests anymore, even though some had already booked a room months or even a year before.”

This abrupt closure lasted for half a year, during which establishments were subjected to inspection, and were made to comply with existing and new requirements, particularly their sewage and wastewater treatments.

Since the island’s reopening last September 2018, though, much has changed in the island—for the better.

NEW PHASE, NEW FACE
Instead of the familiar party crowds and after-party trash, the beachfront is nearly spotless now, thanks largely to the strict enforcement of guidelines and restrictions by the Department of Interior and Local Government (DILG), Department of Tourism (DOT) and its attached agency, Tourism Promotions Board (TPB), Department of Environment and Natural Resources (DENR), and the Boracay Inter-Agency Rehabilitation Management Group (BIARMG).

Multiple signages along the shore prohibit littering, smoking, drinking of alcohol, pets, fire dancing, and vendors. Even building commercial sand castles, as well as structures and furniture are not allowed, too, in compliance with what is called the 25X5 meters easement.

Ever since the closure and reopening, no LaBoracay event has been held. A “no hotel, no entry” policy also requires incoming tourists to present hotel reservations,before entering the island. Far from the cesspool it was once called, hotels now get the green light to open only upon putting in place a sewage system connection or their own treatment facility.

Abiding by these rules and representing the new phase of Boracay is the just opened Citic Hotel.

Apart from impressive amenities and perks—a total of 339 stylish suites, ranging from a cozy 35-square-meter room to a spacious room of 55 square meters complete with Wi-Fi, television, in-room mini bar, and in some, direct pool access; three pools including one for kids; three-minute walking distance from the beachfront; four food and beverage outlets serving uniquely Filipino drinks and dishes; a business meeting room; tour and activity booking services; and daily shuttle services—this Boracay hotel operates with sustainability and inclusivity in mind.

For starters, the majority of the staff servicing guests inside and outside the hotel are locals, in accordance with an ordinance that requires local establishments to hire at least 40 percent of its employees from Malay, Aklan.

“We patronize the locals here and so I would say around 80 percent of the staff here are from different parts of Western Visayas,” says Rose, who is now general manager of Citic. “Some are from Iloilo, Aklan, Roxas, and Dumaguete.” 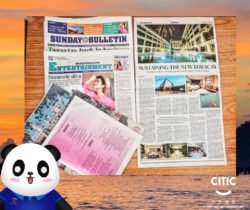 “We try as much as possible to get our ingredients locally,” Rose says. “That’s also because we want to reach out to local farmers and communities, and support them.”

For their oyster omelet, the hotel uses the earthy yet sweet Aklan oysters. Much of the vegetables they use, including those in their simple yet comforting garlic butter stir-fried broccoli and cauliflower, are delivered fresh from Baguio.

Citic’s take on painitan, a popular breakfast platter from Dumaguete, serves a slice of world-famous Guimaras mangoes with budbud or sticky rice, and sikwate or tsokolate batirol with a kick of siling labuyo.

Reduced plastic use is also a norm in the hotel, a practice Rose and the rest of Citic implements in every part of the hotel. As seen at the suites’ in-room mini bar, complimentary drinking water comes in glass bottles. In the bathroom, meanwhile, shampoo, conditioner, and body wash bottles are all refillable.

“The ban on single-use plastic, we like it,” she says. “All hotels are complying with that and that includes us.”

Every month, Citic also does beach cleanups that are coordinated with the local government, which requires every establishment on the island to take part in the effort. The hotel’s approach, however, is a tad bit different compared to others.

“We encourage our guests to join the cleanup,” Rose says. “We wanted to engage our guests and let them appreciate the beauty of the islandand, at the same time, help keep it clean as well.”

WORTH IT
Though workers were left jobless, hotels emptied, and tropical paradise seekers shunned, GM says the closure has resulted in a number of improvements.

“When the closure was ordered, I felt bad for everyone—the business owners, stakeholders, and employees,” Rose says. “The outcome, however, has been amazing. Boracay is cleaner now.”

Regulations on smoking and, recently, vapingare stricter now, too. “Before, people can smoke anywhere they want,” Rose recalls. “Now, it’s under control. The first time they launched the smoking regulations, there was only one place—a spot at D’Mall—where it was allowed. Owners would have to go to the municipal office for permits now should they want to designate a smoking area in their establishments.”

The rehabilitation has also resulted in more opportunities to explore other sights in the region that, in turn, decongests Boracay of incoming tourists. Currently, the island has 13,000 rooms that can accommodate 26,000 tourists. Daily, only 6,405 are allowed to enter the island.

TPB is at the helm of this decongestion effort.

“In sustainable marketing, you have to make sure that you have several packages that you can offer to decongest, and ultimately, to sustain a destination,” says Alberto Gadia from TPB’s domestic promotions department. “This is what we’re doing now in Boracay. There are now packages available for tourists to visit other spots.”

Some of the packages feature the Bugang River, the cleanest inland body of water in the country, is also on Panay Island, specifically in Pandan, Antique. A river tour is available at the site, swimming in the river’s clear waters, and enjoy fishing.

Tourists can also visit Kalibo’s mangrove sites, which also happens to be one of the longest stretches in the country at 220 hectares. Oysters and tamilok or woodworm are absolute must-tries.

People are also starting to discover more of the island’s “Filipino touches,” like its local museum and cuisine. Motag Museum in mainland Malay, for instance, is an interactive space that features the traditions of Panay Island.

All of this is, as indicated in the beachfront signages, “to ensure the preservation of Boracay island” and to “push for a better Boracay.”

Call or Mail us